So, it’s a Monday night. I’d say I put in an unexceptional day at work.  Do I deserve a glass of wine?

In effort to keep up with my debt diet, I decide to cook some dinner using whatever I can scrounge up. I see a freezer full of frozen vegetables (apparently a 10 for $10 sale at Cub is titillating to my husband) and stale ice cubes.  Since I do not share this love of frozen vegetable medleys, I peruse the refrigerator.

Yes! I spy the wheel of brie I forgot I bought at Costco. (Don’t ask- apparently I had provocation to buy an entire wheel of it.)  Oh, and what’s that?  Another hastened purchase: a bottle of something called Bronco Bob’s Roasted Raspberry & Chipotle sauce. I cut myself a wedge of brie, pour the sauce over it, and establish my happy place.

Now, for the trifecta! I pour myself a bounteous glass of Grenache, Marques de Montañana, that I found for $4.99 at Trader Joe’s. Now, it isn’t the most flavorful Grenache I’ve ever tasted. But, hell, it is Monday night and I’m chowing a wheel of brie smothered in raspberry chipotle sauce. It’s going down real easy.

Spanish Garnacha is typically palletable and super affordable- it’s tough to go wrong.  Hints of spice, berry, easily goes with a hamburger as it does some fancy Serrano ham.

So, if you’re looking for a simple red wine that won’t be a flavor dominator, I recommend braving the stupid crowds at Trader Joe’s and picking up at least 2 – 3 bottles; Tuesday night is right around the corner. 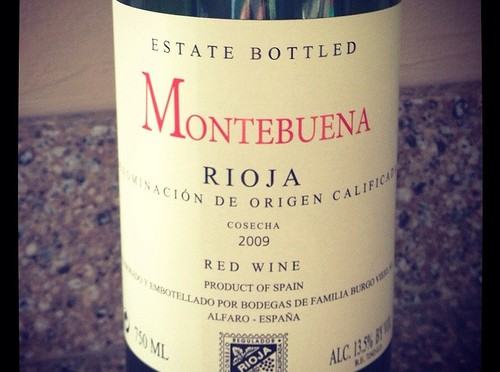 Yum – this review will be simple. I drank it, loved it, cannot remember much but that. Hmm, let me scroll through my wine photos. . .

Oh yeah, now I remember. There was a snowstorm; we stayed in, watched Iron Man II and got take out from a local Mexican Ristorante down the street. I had it with tacos al pastor, it was heavenly. Just pick this one up and let me know what you think.

Even though this is {tip Indicazione Geografica Tipica, typical regional wine. Also commonly referred to as TABLEWINE, or in my house, everday wine.}IGT{/tip}, it drinks smoother. This is a versatile red that goes with pasta, meat and cheeses. It’s an earthy wine taking on hints of herbs, cherries, licorice and plum. Medium to full body – this fruity, spicey number is sure to please.

Okay – enough of the stereo instructions. Notice the red cap in the photo, that’s right. A-RED-SCREW-CAP. What does the Savvy Lush think? Perfect lazy-man’s wine or if you’re going to someone’s abode and they stupidly don’t have a corkscrew.  You can find this ditty in so many stores. It’s a nice go-to wine for our household. Right now I’m finding 2007’s and that is good for us! When I was in Italy last Summer, my Italian friend, Maria Grazia, told me that 2007 was a GREAT year for grapes and wine making in Italy along with the rest of Europe. Therefore, when I’m at the store and see just about any European bottle with a 2007 year on the label, I swipe it up. You may find me searching for the best bargain 2007 wine out there. Hmm, do I detect a Savvy Lush challenge? Stay tuned. . .

If you like Chianti, you’ll like this due to it’s higher concentration of the Sangiovese grape. For those who think Chianti is too dry, you may like this due to the blend of Merlot and Cab. Give it a whirl, won’t cha’? Pick up a bottle tonight to accompany a hearty pasta dish with your hunny or bring it to a dinner party. You can wow your audience while you spew facts about how terrific a year 2007, was for European wines.