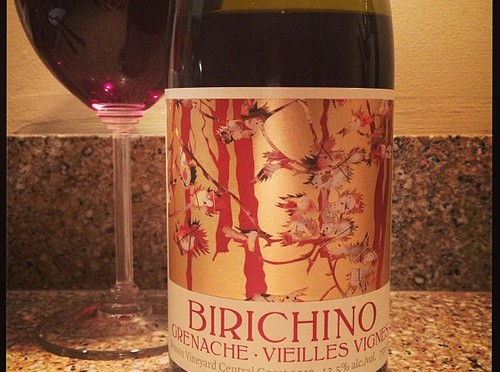 I’ve found my favorite American Grenache in this bottle of Birichino. [biri-kino]

I first had this at Sunfish Cellars by the glass ($4/glass!). It’s a wine that haunts you, though not in a “Poltergeist” sort of way. You can’t get it out of your head. Yes, this is a wine you’re going to love instantly.

When I saw it was from California, I assumed this was going to be very alcoholic, ripe with sweet cherry flavors- indicitive of “New World” wine making. Man, was I taken aback when I tasted it! This wine tastes far more “Old World” to me. “Old World”, “New World”?  What is THAT you’re saying? Is that anything like “Red Fish, Blue Fish”?

I shan’t assume we all know what that means. “Old World” refers to wines made in Europe. “New World” refers to wines made in, well, NOT Europe. North or South America, Australia, New Zealand, South Africa. . .basically, anywhere that is not Europe [who ever said wine making wasn’t Eurocentric?].  Wine Folly does a great job of breaking it down for you: http://winefolly.com/review/new-world-vs-old-world-wine//Old World vs. New World

This Birichino Grenache gives great, bright cherry scents right off the bat. The flavors of that bright cherry and strawberry explode on your tongue along with some herbal hints. This Grenache evokes layers of spice and smoke with a soft tang; not acidic but more in a way that tea evokes layers of flavor. While subtle, it’s well enough to know it’s there.

I’ve seen Birichino Grenache for around $20, maybe a couple bucks less if it’s on sale.  If you are a lover of Grenache, though, don’t even hesitate to plunk down the money for this bottle. Pick it up at Sunfish Cellars or Zipp’s and let me know how much you love me for introducing you to this wine!