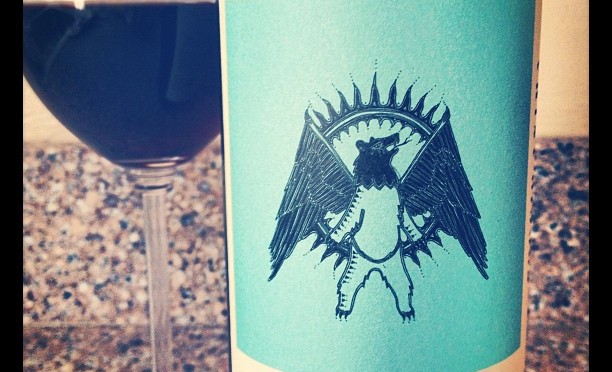 “When the moon hits your eye like a big pizza pie, that’s Sangiovese”

“Quando beve questo vino, tu parlero italiano!” [When you drink this wine, you will speak Italian!]

To me, there is a state of bliss that resembles ignorance. Bliss that will have you singing in the shower, in the car, or whilst folding laundry, perhaps. Somewhat ironically, the “ignorant” bliss I was experiencing was due to knowledge I’d just acquired. If I had a rating system, this red of the week would be the tops. However, I’m not down with the “4-star-this” or “89-cork-lengths-that” kind of wine rating B.S., so you’ll have to use your imagination.

I would be remiss not to thank my friend (we’ll call her “Christine”), a local wine rep & graphic artist extraordinaire, for introducing me to this Sangiovese. Yes, she’s a wine rep. No, this is not a wine she was trying to unload in droves because it’s not selling. In fact, she bought this terrific wine for me, and it is NOT one of the hundreds of wines she sells.

So, where is this bliss coming from? It’s no secret that I’m in love with all things Italian, so going into it, this wine did have a slight [read: HUGE] advantage. This wine begs to be paired with food. Not that it isn’t delicious on it’s own, it just really comes alive with some good, old fashioned Italian cuisine. Pair it with pizza, lasagna, or simply drink it with your tried and true pasta and “gravy”. Grill a beautiful steak with some rosemary sprigs, toss a little pasta with a ragu of tomatoes, basil and pepperoncino (fancy for red pepper). Make sure you get your greens so add a salad of arugula in a lemon vinaigrette with toasted pine nuts and shaved pecorino. This is also a bottle you bring to the restaurant. Even though al Vento, in South Minneapolis, has an impressive wine list, bring this wine in and have it with their spaghetti in mother sauce & homemade meatballs or anything that includes wild boar. Tip: have them open it right away so it can bloom.

Goodness, all I’ve been doing is daydreaming about what I would do with this wine! I haven’t even begun to describe the aromas and tastes, or it’s native region.

The Poggio Anima Belial Sangiovese is easily recognizable by it’s pretty turquoise label. It’s crazy this is “just” an

hailing from Tuscany, this red wine embodies all that I love about Tuscan wines. It smells and tastes of sun kissed red berry fruit; it’s dry, earthy, and delicious. After it continues to open, scents of cherry cola, minerals and spice emerge. Swirl that essence along with the red fruit, and there’s simply no way you won’t be transported to the rolling hills of Tuscany. I imagine sitting on a terrace overlooking vineyards, church steeples and cypress trees while I savor every sip. Am I getting through to any of you?

Check out my Facebook page (shameless plug) where I posted a photo of this wine and read all the comments. I had no clue this was a favorite among so many people (and so many wine fanatics!).