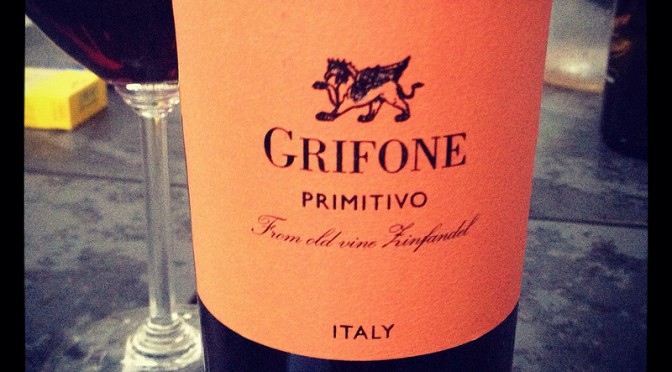 I truly was skeptical when I saw this Grifone Italian Primitivo at such a price point (insert infomercial joke here). I [stupidly] asked the sales clerk what he thought of it. (Ugh, remember when I did that with the Rosé and it turned out to be useless swill?) Well, in true TJ’s form, he said it was “really good for the price”. Great, thanks. Dare I plunk down $4 knowing I’ve had such stinkers from TJ’s as of late? Throw good booze money after bad? Well, “they cannot _all_ be stinkers” I thought, so I took the $4 gamble.

Primitivo is a grape that most similarly resembles the Zinfandel grape. Some even say that Zinfandel grapes are the same or born out of Primitivo grapes. Hell, check out the label, which says “Old Vine Zinfandel” right on the front. So, let the great debate continue! Either way, I say if you like one, you’re more than likely going to enjoy the other.

Also, like Zin, Primitivo is a great BBQ wine. This wine will fit in nicely with your weeknight hamburger and hot dog grilling plans or could pair with anything slathered in BBQ sauce.

Well, anything you would slather BBQ sauce on in front of your grandmother, at least.

The taste of this Primitivo is fairly mild with notes of cherry and jammy spice. The nose isn’t anything special, and finish is rather fleeting but really, who cares?!? Easy drinking, smooth and pleasing, this is classic “Skank”. But, if you’re truly worried, make sure you have some dark chocolate on hand-never a bad idea.

IMPORTANT NOTE: It’s advertised as a limited selection so I’m telling y’all, get off yer arse and get yours ASAP. 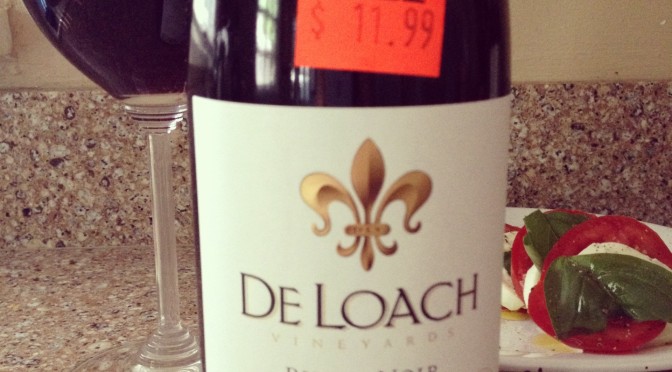 So many people have asked me for a budget Pinot Noir recommendation. I’ve tried a few Chilean Pinots, and they’ve been, well, “meh”. Since they don’t exactly taste like Pinot Noir to me, I think they’re a decent value. I’ll be honest and say I’m a California & Oregon Pinot Noir fan. That’s my own palate preference with this wine varietal. [That is, until my good friends at Familia Meschini come out with their Pinot.]

I’ve visited the DeLoach vineyard, located in the Russian River Valley of Sonoma, California. Typical of the Russian River Valley, this winery creates some primo Pinot Noirs, and with a price tag to match. So, when I saw a DeLoach Pinot Noir on sale for $11.99, I thought I’d give it a go. Now, a $12 price for Pinot is a bit like seeing a new Mercedes for $4000. However, with the DeLoach name on the bottle, I figured it wouldn’t be entirely useless swill.

Now, this isn’t a $40+ bottle of Pinot Noir. It just isn’t as refined as others. In fact, you could say it’s a little rough around the edges. But that’s OK, because sometimes we like it a little rough.

Until then, I think this DeLoach Pinot at $12 and change is a great value. The grittier, rougher Pinots may just excite you in a way you never thought it could. It may not rock your world, but it also won’t rock your wallet like one quadruple its price. 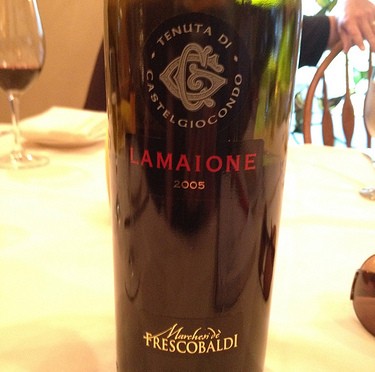 Grapes: Merlot with some interpretations

Recently, I quasi-invited myself & a wine-friend to a #Geeks’nGrapes (as they’re known in the Twitter world) Merlot tasting. This group’s moniker couldn’t be more apropos, as it is comprised of two Sommeliers [as deemed by their level 2 certification] along with a fellow I’ve deemed “Mr. Wine Encyclopedia”.

Okay, blah blah blah Merlot, blah-blibbity-blah. “Sideways” was years ago, people, and NOT a documentary! Are we still solely enamored with Pinot Noir, frivolously casting away Merlot like a redheaded stepchild? Well, kids, if you haven’t welcomed Merlot into your household, for shame! Mind you, Paul Giamatti was handed that script. Much like Lowell’s (the “other” guy in the movie- remember the TV show “Wings”?) chubby chasing character, you always have a choice.

So, not knowing what beast’s belly I was heading into, I drove up to North Loop Wines & Spirits as they were having a buy one, get one ½ price sale. I talked to the wine dude there, his name is Kyle. I trust this guy implicitly, I don’t know why. I don’t know him very well but I do know that he’s a straight shooter who: a.) enjoys biking, b.) is a huge fan of The Band (RIP Levon), and c.) is a fellow Nordeaster. Oh, and for you gals (and non breeder males) reading along, he’s easy on the eyes, too.

I told him I needed a good recommendation for a Merlot tasting, but wanted to stay under my $15 price point. He introduced me to the Grayson Merlot from Napa Valley. Since I was going into this whole “Geeks” thing blind, I told him I’d blame him if this wine was deemed useless swill. Spineless? Perhaps, but I wanted to test his fortitude. (I mean, he’s _kind of_ playing the role of my physician, right?) To the #GeeksnGrapes event I go!

We started the evening with a 2005 Merlot from Tuscany, Italy called “Lamaione” from Marchesi de Frescobaldi.

I learned that Merlot is the third most planted grape varietal in Italy. This wine was garnet/ruby colored, with an orangish hue due to it’s age. The wine was aged for 24-48 months in oak. An earthy, musty, oaky wine with a medium to full body without much berry flavor, but with a long finish. After being uncorked a couple hours, it opened up to have a strong cedar scent and taste.  This wine was in someone’s cellar for a few years, and sported a price tag greater than $50, so we speculated it could possibly be found at i Nonni.

We followed that with a 2009 Bordeaux from France called “Chateau Vauzelle, Lalande de Pomerol”.

This wine hails from Northern France. This wine differed in that it wasn’t a straight Merlot [bi-curious, perhaps?], but included Cabernet Franc and Cabernet Sauvignon. Garnet in color, this had more cherry to it compared to the Tuscan Merlot, and was tannic and dry. I found it to be one of my favorites. This wine can be found at France 44 & North Loop, around $35-$40.

Oh wow, what a switch from Old World (Europe) to New World (Americas, Australia, New Zealand) wine! Like the British Office to the American version, or Jefferson Airplane to Starship [only way less crappy than either Grace Slick vehicle]. This wine was a brighter garnet color, and was more fruit forward than it’s European cousins- less tannic, softer, but tasted of sour cherry and stewed fruit. This wine is around $13 at North Loop and Solo Vino.

Then we moved up the Coast to “The Velvet Devil”, a 2010 Merlot from Washington State brought by my friend.

This was slightly deeper in garnet color compared to the Grayson, but still lighter than the others. This Merlot was oaky, smoky and slighted spiced. This wine is also around $13 at Solo Vino, North Loop and Pairings.

Number five on the docket was another Washington wine called, “Pedestal”, a 2007 Merlot from Columbia Valley in Walla Walla.

This wine is deeper Garnet in color and is big bodied [not unlike the Starship-era Slick]. It was robust and bolder than the other New World Merlot’s. We deemed this to be a Cabernet Sauvignon lover’s Merlot. This wine can be found at France 44, around $55.

Lastly, we travelled back down to Napa Valley and tried a favorite of “Mr. Wine Encyclopedia”, Chappellet’s 2009 Merlot.

This wine had the highest alcohol content, yet was smokier, spicier, thicker and heavier than the others, still. A great finisher, indeed.

As we sat around and waxed poetic about what first got us interested in wine, we revisited each one to notice more changes and evolutions to the scents and tastes. It’s one of those entities that you cannot judge at first site. There are nuances that continue to evolve. Our jobs are to find that balance of nature, skill, age, knowledge and enjoyment. This is when we understand what the winemaker desired and what we desire in a wine, we appreciate the efforts put forth to enable you to drink said wine and we enjoy the fruits of someone’s labor [no pun intended] while enjoying life’s riches. We truly are a lucky people.

Oh, and Kyle’s recommendation lived up to it’s promise: a truely smokin’ Merlot for under $15.