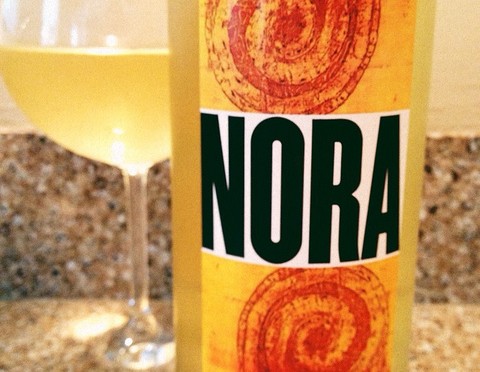 So it was yet another hot weekend, and I was home alone. What’s a girl to do? Well, let me tell you what I did. Feeling a bit nostalgic, I watched the classic 90’s movie “Singles”. This will surely date me, but I don’t care. I totally bought into the grunge era: music, wardrobe, dirty hair and all. I had a bowlful of white gazpacho left and looked into my wine selection. Aha, Nora Albariño, that sounds good. I cued up the movie and garnished my soup with chives, cucumbers and fresh sweet tomatoes. The Albariño was chilled perfectly so pour away I did.

I’m new to Albariño, but know that they can vary in sweetness. It may be “dumbing it down”, but I’d explain it as sitting on the spectrum between Sauvignon Blanc and Chardonnay. The Nora Albariño definitely sides more toward the acidic & tart variety. I’d liken it to a Sauvignon Blanc, but with a slightly fuller body due to the aging in oak. Also, this is not as thick and syrupy as some Chardonnays, for those who say they don’t like oaked Chards.

This wine was light golden in color and the fragrance included hints of apple, green grapes, peach and herbs. On the palate, citrus fruit, herbs and floral minerality emerge. I did some digging and the vineyard where the grapes are grown are surrounded by pine and eucalyptus. Aha, those scents must waft and swirl around the vines imparting their essence into the grapes. I am not saying you are drinking a glass of gin; but rather suggesting that, beyond the citrus and stone fruit, you get hints of the surroundings that play along.

I continued to enjoy the way the crisp and vibrant Albariño danced in my mouth, and I must say, this went swimmingly with the creamy gazpacho.

This taste experience was made even better, as I enjoyed watching a young Eddie Vedder [hey, that kind of rhymed] portray the Citizen Dick drummer, and 20-somethings are “finding themselves” in Seattle set to the sounds of the late 80s-early 90s. I finished the soup but continued sipping the Albariño. I noticed a smile on my face as I was listening to Soundgarden, Alice in Chains, and Jimi Hendrix (yep, from Seattle, and on the must-have soundtrack).

While I’m not rushing to bring back that whole look, I did go in search of my old flannel that I’ve kept in the bottom of a storage box. Some things, like comfy clothes or a good gazpacho/wine pairing, never really go out of style.